(Born December 9, 1973) is a New York Times bestselling author, serial entrepreneur, nonprofit CEO and political leader. After serving for eleven years in the Georgia House of Representatives, seven as Democratic Leader, in 2018, Abrams became the Democratic nominee for Governor of Georgia, winning more votes than any other Democrat in the state’s history. Abrams was the first black woman to become the gubernatorial nominee for a major party in the United States, and she was the first black woman and first Georgian to deliver a Response to the State of the Union. A member of the Democratic Party, Abrams founded Fair Fight Action, an organization to address voter suppression, in 2018.[3] Her efforts have been widely credited with boosting turnout among progressives in Georgia,[4] including in the 2020 presidential election, where Joe Biden won the state, and in Georgia’s 2020–21 U.S. Senate election and special election.

Abrams was the Democratic party’s nominee in the 2018 Georgia gubernatorial election, becoming the first African-American female major-party gubernatorial nominee in the United States.[5] She lost to Brian Kemp in an election marked by accusations that Kemp engaged in voter suppression.[6][7] In February 2019, Abrams became the first African-American woman to deliver a response to the State of the Union address.

Over the course of her career, Abrams has founded multiple organizations devoted to voting rights, training, and hiring young people of color, and tackling social issues at both the state and national levels. In 2019, she launched Fair Count to ensure accuracy in the 2020 Census and greater participation in civic engagement, and the Southern Economic Advancement Project, a public policy initiative to broaden economic power and build equity in the South. 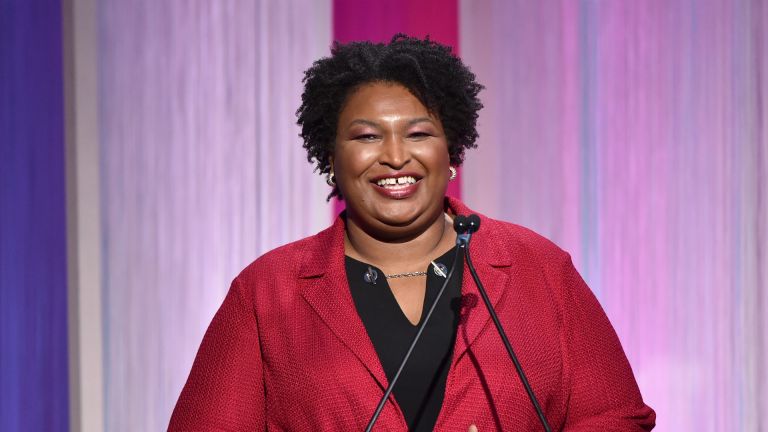 Abrams is a lifetime member of the Council on Foreign Relations, where she serves on the Subcommittee on Diversity. As a Next Generation Fellow of the American Assembly on U.S. Global Policy and the Future of International Institutions, she also served as a discussion leader, editor, and essay contributor. She was also selected as a Salzburg Seminar Fellow on East Asian Studies, an American Marshall Memorial Fellow, an American Council of Young Political Leaders Fellow, a Council on Italy Fellow, a British-American Project Fellow and a U.S.-Russia Young Leaders Fellow. As the top-ranking Democrat in Georgia, she traveled to and met with leaders in South Korea, Israel and Taiwan, and she worked closely with several members of the consular corps. Her international policy travel includes Australia, Austria, Belgium, Bulgaria, Canada, France, Israel, Italy, the Netherlands, South Korea, Switzerland, Taiwan and the United Kingdom. Abrams is a member of former Secretary of State John Kerry’s World War Zero bipartisan coalition on climate change. She has been a featured speaker at the Aspen Ministers Forum, the Kerry Initiative-Yale Jackson Institute of Global Affairs, the National Security Action Forum and the Council on Foreign Relations, as well as a contributor to Foreign Affairs Magazine.

She is a recipient of the John F. Kennedy New Frontier Award and a current member of the Board of Directors for the Center for American Progress. Abrams has also written eight romantic suspense novels under the pen name Selena Montgomery, in addition to Lead from the Outside, formerly Minority Leader, a guidebook on making real change, and Our Time is Now, which will appear in bookstores in June.

Abrams received degrees from Spelman College, the LBJ School of Public Affairs at the University of Texas and Yale Law School. Born in Madison, Wisconsin, she and her five siblings grew up in Gulfport, Mississippi and were raised in Georgia.