By JAMMIN' 101.5 On Sep 9, 2019
The victim Diamante Williams is reportedly fighting for his life inside of an Illinois hospital. The suspect is still at large.

A 28-year-old man is fighting for his life after being hit in the head with a bowling ball at a local Illinois bowling alley. According to ABC, Diamante Williams attended Town Hall Bowl in Cicero Wednesday night (Sept. 4) when a fight broke out.

In a video posted to Facebook two days after the brawl, security guards can be seen attempting to break things up when a man holding a bowling ball lifts his hand in the air and smashes it on Williams’ head. Screams could immediately be heard following the barbaric act.

“It is horrific,” Tamekio Williams, Diamante’s mother said. “I just couldn’t believe somebody could be that inhumane to do that to another human being.

The Cicero police department released a CCTV image of the alleged attacker and is now leaning on the public’s assistance in hopes to arrest him.

The Cicero Police Department is attempting to identify the below listed subject. If you have any information, please contact the Detective Division. 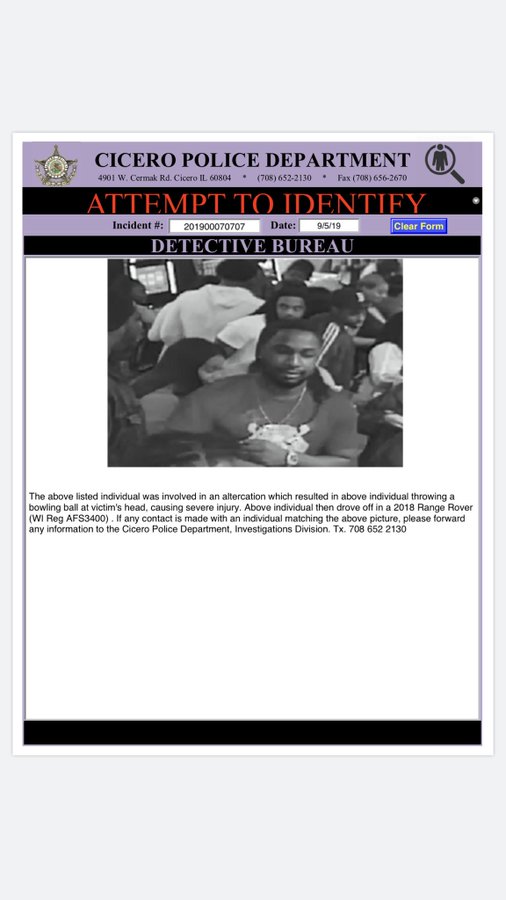 58 people are talking about this

The suspect reportedly drove off in a white 2018 Range Rover with a Wisconsin license plate. Williams’cousin Valencia said since the Facebook video went viral more people are aware, but she’s saddened that in the moment no one stopped to help.

“It went viral on Facebook and it is heartbreaking to see a loved one in that capacity and no one helped,” she said. “All the people who were around immediately took out their phones and recorded it.”

Tamekio Williams spoke with a local news outlet and said her son is out of the medically-induced coma but has a long recovery ahead of him. She also urged the public to help bring her son’s attacker to justice.