American track star Jesse Owens became the hero of the 1936 Olympic Games in Berlin, Germany, as his series of victories scored a moral victory for African American athletes. Jesse Owens was one of America’s greatest participants in track and field athletic competition. He won four gold medals at the 1936 Olympic games.

He was born James Cleveland Owens on September 12, 1913, in Oakville, Alabama. When he was eight years old, his family moved to Cleveland, Ohio. During the 1910s and 1920s, hundreds of thousands of African Americans moved from the South to the North in what came to be known as the Great Migration. At his first day of school in Cleveland, the teacher asked Owens his name. Owens responded, “J.C.” The teacher misunderstood and Owens became known as Jesse.

Life in Cleveland did not prove to be as successful as the Owens family had hoped. Jesse had to take jobs after school. At different points, he worked in a grocery store, a shoe repair shop, and as a loader of freight cars. In his spare time after work and school, Owens excelled at track and field events and was on the track team in junior high school. He became a star athlete and tied the world record in the one hundred-yard dash while he was still in high school.

Because of Owens’ success on the track, a number of universities recruited him. He decided to attend The Ohio State University. Owens lived a separate life at Ohio State because of the racial discrimination that was common at the time. He was not permitted to live on campus with white athletes. When the track and field team traveled, Owens had to eat in the African-American sections of restaurants and stay in hotels that would accept black people. Often, this meant that Owens was separated from his teammates while eating and sleeping. Ohio State also did not provide him with a scholarship. Owens worked odd jobs for the university to pay his way through school.

Jesse Owens proved to be one of the greatest athletes in the history of The Ohio State University. At the Big-Ten’s track and field meet on May 25, 1935, Owens tied one world record and set three new ones. Only a freshman, he did all of this with a sore back from a fall earlier in the week. Owens also accomplished these feats in a forty-five minute span. He first tied the one hundred yard dash record. He then broke the broad jump record by almost six full inches and set new records in the 220-yard dash and in the 220-yard low hurdles. 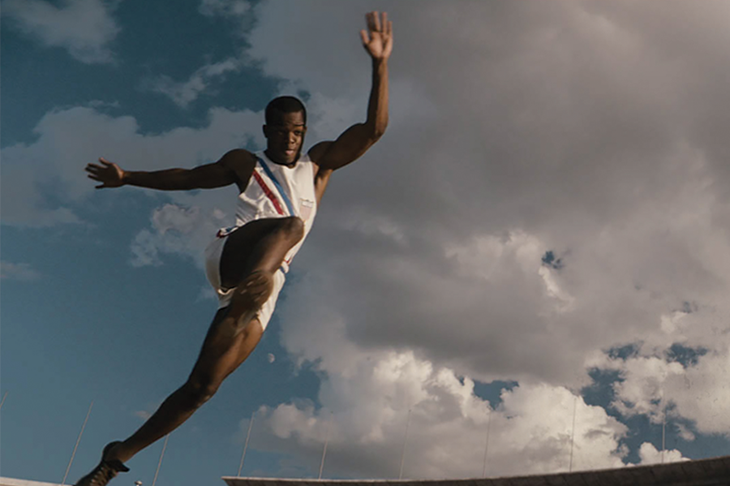 In 1936, Owens competed in the Olympics in Berlin, Germany. Adolf Hitler, the Chancellor of Germany, hoped to use the Olympics to prove that the “Aryan” race was superior to all others. If this was the case, Jesse Owens dashed his dreams. At the Olympics, Owens won four gold medals and set or helped to set four Olympic records. The events were the one hundred-meter dash, the two hundred-meter dash, the broad jump, and the four hundred-meter relay. Owens was the first American track and field athlete to win four gold medals in a single Olympics. By the end of the competition, even German fans were celebrating Owens’ accomplishments. Owens later wrote in his autobiography that Hitler waved to him.

In 1935, Owens married his high school sweetheart. He left Ohio State during his senior year and went to work to provide for his family. Owens did what he did best to earn a living – running. People paid Owens to race them. They paid him to race racehorses and motorcycles. For a period, the Negro Baseball League hired Owens to race racehorses before ballgames. He usually won these competitions. Owens later opened his own public-relations firm. He gave speeches across the United States for various companies and also for the United States Olympics Committee. He emphasized to his audiences the need for perseverance, hard work, and religious devotion. He also worked as a jazz disc jockey in Chicago, Illinois.

In 1976, Jesse Owens received national recognition for his achievements. That year, President Gerald Ford awarded Owens the Medal of Freedom. A smoker, Owens died from lung cancer on March 31, 1980.